Which countries do migrants want to move to?

Conflict, famine and disaster are driving large numbers of people from countries such as Syria, South Sudan and Congo, while chronic high unemployment is at the root of people’s desire to leave Albania.

And where do they want to go? The US primarily: one in five potential migrants named the country as their preferred destination. Meanwhile, Germany, Canada, the United Kingdom, France, Australia and Saudi Arabia appeal to at least 25 million adults each. Roughly 20 countries attract more than two-thirds of all potential migrants worldwide.

The US has been the preferred destination for potential migrants for years. However, Germany’s popularity rose significantly after Chancellor Angela Merkel promised “no limit” to the number of refugees her country would accept. The period of Gallup’s survey covered the height of the European migrant crisis.

By contrast, the UK lost some of its allure during the lead-up to the Brexit vote, with 35 million potential migrants naming it as their desired destination between 2013 and 2016, down from 43 million between 2010 and 2012.

In 31 countries throughout the world at least three in 10 adults say they would like to move permanently to another country if they could.

Desire to migrate increased the most in non-European Union countries in Europe, in Latin America and the Caribbean, and in the Middle East and North Africa. This is in contrast to Asia, the US and Canada where the desire to move remained pretty constant.

The figures also show that following the global financial crisis, the desire to migrate diminished. But with an improving economic climate, alongside increasing unrest in some parts of the world, the number of people wishing to move is once again on the rise.

The views expressed in this article are those of the author alone and not the World Economic Forum.

The U.S. stopped short of branding China a currency manipulator, but urged the world’s second-largest economy to let the yuan rise with market forces and embrace more trade.

No major trading partner is manipulating its currency for an unfair trade advantage, according to the first foreign-currency report released by the Treasury Department under President Donald Trump. It kept China, South Korea, Japan, Taiwan, Germany and Switzerland on its foreign-exchange monitoring list.

“China currently has an extremely large and persistent bilateral trade surplus with the United States, which underscores the need for further opening of the Chinese economy to American goods and services,” as well as quicker reforms to boost household consumption, according to the Treasury report. 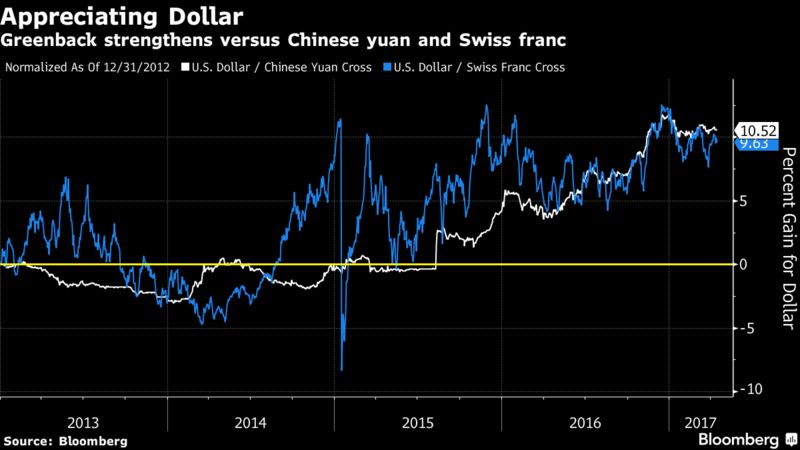 Trump declared that he’ll back away from a campaign promise to name China a currency manipulator, a move that would have created friction between the world’s largest economies as they try to boost trade cooperation and address North Korea’s nuclear threat. Trump, in a Wall Street Journal interview, said China hasn’t manipulated the yuan for months, while accusing nations that he didn’t identify of devaluing their currencies and saying the dollar is getting too strong.

The report contains an implicit threat that unless China gives U.S. exporters greater market access and further rebalances the economy, the U.S. could act to rectify the trade imbalance, according to Eswar Prasad, former head of the IMF’s China division and author of “Gaining Currency: The Rise of the Renminbi.”

“While China now meets only one of the three criteria for currency manipulation listed in the report, the text makes clear that China’s large bilateral trade surplus with the U.S. is by itself enough to warrant careful scrutiny of China’s trade and currency practices,” said Prasad, a professor at Cornell University in Ithaca, New York.

The Treasury report said that for a decade China engaged in one-way, large-scale interventions to hold down the currency, and then only allowed it to strengthen gradually -- a practice that imposed “significant and long-lasting hardship on American workers and companies.” While China has been intervening to prevent a depreciation of the yuan, its selling of foreign currency reserves abated early this year, Treasury said.

Now, China needs to show that its lack of intervention in the currency markets “to resist appreciation” over the past three years is a “durable” policy by allowing the yuan to strengthen “once appreciation pressures resume,” the Treasury said.

Treasury avoiding the manipulator label reflects that China’s current-account surplus as a share of output is much reduced, and currency intervention now supports yuan strength, according to Bloomberg Intelligence economists Tom Orlik and Justin Jimenez. China has burned through almost $1 trillion of its foreign reserves, or about a quarter of the total stockpile, since mid-2014 to help support the currency.

“After much hoopla, and with a few extra bells and whistles, the Treasury’s position is completely unchanged,” Orlik and Jimenez wrote in a report. “Treasury does have some choice words for China, accusing it of causing ‘long-lasting hardship’ to American workers. And there’s what looks like a change in the criteria, opening the possibility that China’s outsize trade surplus alone will be enough to keep it on the watch list.”

Like the last report by the Obama administration in October, China met only one of the three criteria -- for having a large trade deficit -- that’s used by the Treasury as a threshold for manipulation. China’s $347 billion goods trade surplus with the U.S. was the largest of major trading partners last year, according to the report.

Taiwan also met one condition, while the other four met two.

The Treasury said Germany has a “responsibility” to help balance global demand and trade flows. Europe’s biggest economy should use fiscal policy to encourage strong domestic demand, which would put “upward pressure” on the euro. Switzerland “could increase reliance on policy rates in order to limit the need for foreign-exchange interventions, which should be made more transparent.”

In Asia, Taiwan, Japan and South Korea were urged to keep interventions to a minimum, and aspire to have flexible and transparent exchange rate policies. 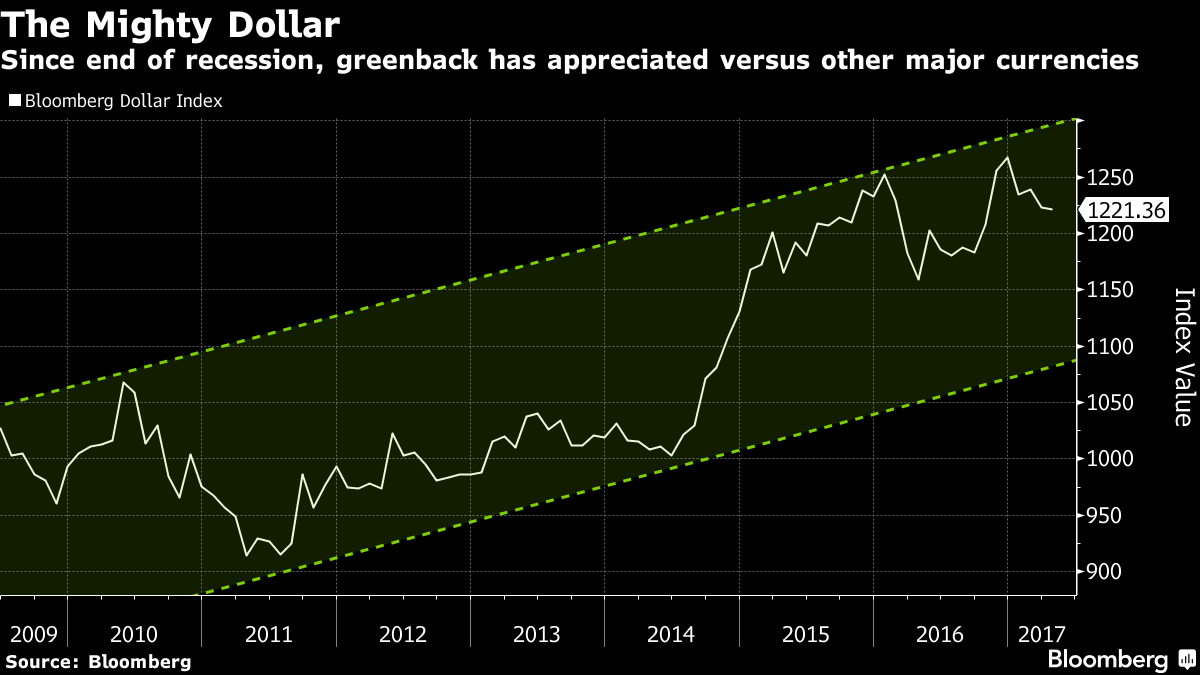 “The United States cannot and will not bear the burden of an international trading system that unfairly disadvantages our exports and unfairly advantages the exports of our trading partners through artificially distorted exchange rates,” the report stated. “Treasury is committed to aggressively and vigilantly monitoring and combating unfair currency practices.’’

The department is required by law to report to Congress twice a year on whether America’s major trading partners are gaming their currencies. The report is the government’s formal channel to impose the manipulator designation, leading to a year of negotiations for a solution and penalties if the practice continues.

The U.S. hasn’t branded any country a manipulator since 1994.

A senior Bank of Korea official said South Korean foreign-exchange authorities maintain their stance that the exchange rate is to be determined by the market as the report emphasized fair competition. The official asked not to be identified because the central bank hasn’t issued a statement the report.

A spokesman for Taiwan’s presidential office referred a request for comment to the central bank. An official at the monetary authority, who asked not to be identified, said Saturday that the central bank is in continued contact with the U.S. and has good communication channels with Washington.

The Treasury left the criteria for manipulation unchanged at having a trade surplus with the U.S. above $20 billion; having a current-account surplus amounting to more than 3 percent of gross domestic product; repeated currency depreciating by buying foreign assets equivalent to 2 percent of output over the year.

Commerce Secretary Wilbur Ross has said that the issue of “currency misalignment” -- which could also include unintentional devaluations -- will be addressed in a study of trade abuses by nations that run large surpluses with the U.S., which is due to be ready in June.

Qatar to fly barred nationals after US travel ban stayed

Qatar Airways said Saturday it would fly passengers to the United States from seven previously barred Muslim-majority countries after a US judge temporarily halted a controversial travel ban .

A travel alert posted on the Doha-based airline’s website said the carrier would comply with the new orders as long as passengers had a valid visa.

“As directed by the US Customs and Border Protection, nationals of the seven affected countries listed below and all refugees seeking admission presenting a valid, unexpired US visa or (Green Card) will be permitted to travel to the United States and will be processed accordingly upon arrival,” read the statement.

The decision was taken after Seattle US District Judge James Robart announced a temporary suspension of President Donald Trump’s travel ban. The White House said the ban — introduced via executive order last week — was placed upon nationals from Iran, Iraq, Libya, Somalia, Sudan, Syria and Yemen as a security measure.

Qatar Airways had complied with the ban, which also suspended refugee arrivals. The Gulf carrier flies to at least 15 American cities including New York, Atlanta and Chicago .

Chinese industry called on Saturday for talks with the United States to seek an end to anti-dumping duties imposed on its exports of large washing machines, state news agency Xinhua reported.

The U.S. International Trade Commission last month made a final finding of harm to a U.S. manufacturer after a Commerce Department probe found some large residential washers were being imported from China at below fair value.

"The move hurts not only Chinese manufacturers, but also the interests of U.S. consumers," the China Chamber of Commerce for Import and Export of Machinery and Electronic Products (CCCME) said, according to Xinhua. "The chamber is concerned about the U.S. use of trade remedy measures to protect its own market, and hopes to solve the issue through negotiations to gain win-win results."

The investigation followed a petition by Whirlpool Corp over imports of washers manufactured in China by two South Korean companies, Samsung Electronics Co Ltd and LG Electronics Inc. The ITC decision imposed of final duties of up to 52.5 percent.