Roses and champagne have been given to passengers on the first commercial flight between Ethiopia and Eritrea in 20 years.

Ethiopian Airlines said its "bird of peace" flew to Eritrea, after the end of the "state of war".

Passengers sang and danced in the aisles during the 60-minute flight. But they wept once they landed in Eritrea's capital Asmara, as they met relatives and friends for the first time since the 1998-2000 border war.

This led to the closure of air and road travel between the two nations.

Ethiopia's Prime Minister Abiy Ahmed has spearheaded a peace process with Eritrea since he took office in April. He signed a "peace and friendship" agreement with Eritrea's President Isaias Afwerki on 9 July, declaring that the "state of war" was over. 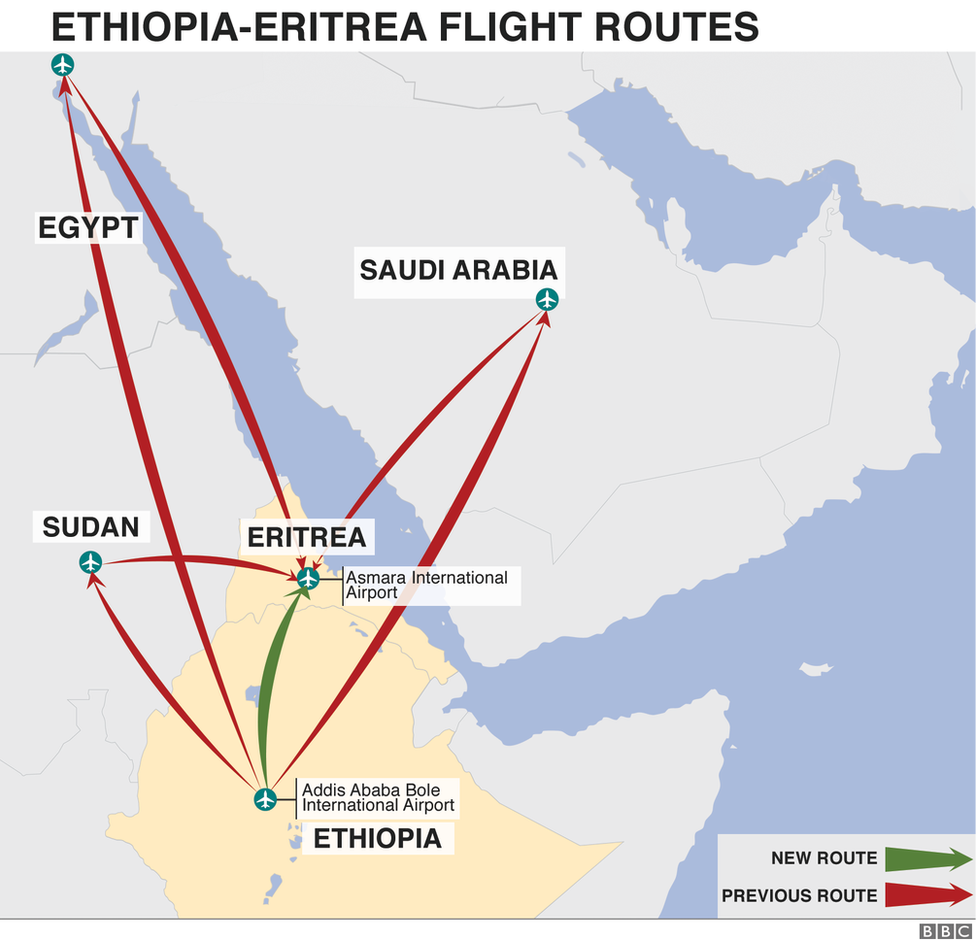 The deal was signed in Asmara, during the first visit by an Ethiopian head of state to the country in 20 years. Mr Isaias made a reciprocal visit to Ethiopia about a week later.

Who was on the flight?

Former Ethiopian Prime Minister Hailemariam Desalegn was among the passengers on the historic flight. He told the BBC's Emmanuel Igunza that he was emotional about making the trip.

"It's a golden moment for the two countries and the two people," he said.

Family members separated by the war hugged and sobbed when they met in Asmara. Flight attendants had handed out roses and had served champagne to passengers in all classes during the flight.

The passengers included 33-year-old Izana Abraham, who was deported from Eritrea during the war because he was born in Ethiopia.

"I'm super excited. You have no idea," Mr Izana was quoted by AFP news agency as saying.

"This is history in the making," he added.

More than 450 passengers were on board, Ethiopia's privately owned Addis Standard news site reported. Demand was so high that a second flight left within 15 minutes, AFP reported.

Why is this a big deal?

Eritrea seceded from Ethiopia in 1993. Five years later, their armies fought over disputed territory along their border. Some 80,000 people were killed in the conflict.

A UN-backed boundary commission ruled in 2002 that Ethiopia should cede the town of Badme to Eritrea. It refused, and the two countries remained in a state of "no war, no peace".

Mr Abiy has promised to hand over territory, but it is unclear when this will happen.